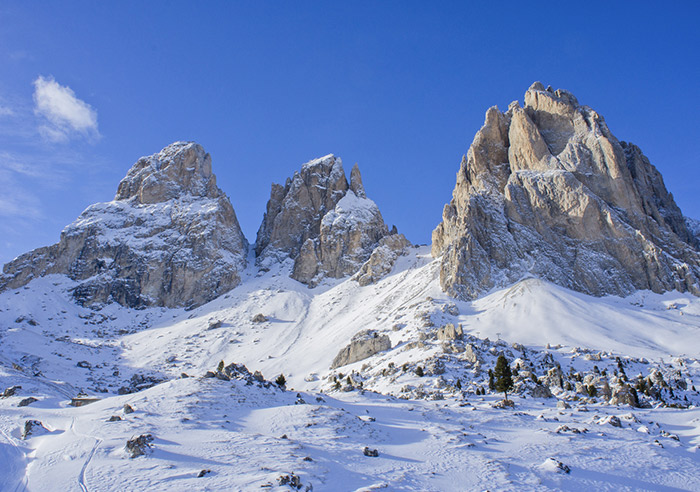 Guided excursion in the footprints of the King of Saxony”
Special features: panorama, geology, flora and fauna, history The departure point for this truly unique excursion into history is Passo Sella. The walk goes up to Col Rodella and then follows the trail as far as the Sasso Piatto Refuge.
This part of the trail is named after the king of Saxony, “Friedrich-August“. In 1904, he stayed, together with his court in Siusi, where he loved to take long hikes in the mountains. From the Sasso Piatto Refuge it is possible to continue to Cresta di Siusi or down to Saltria. 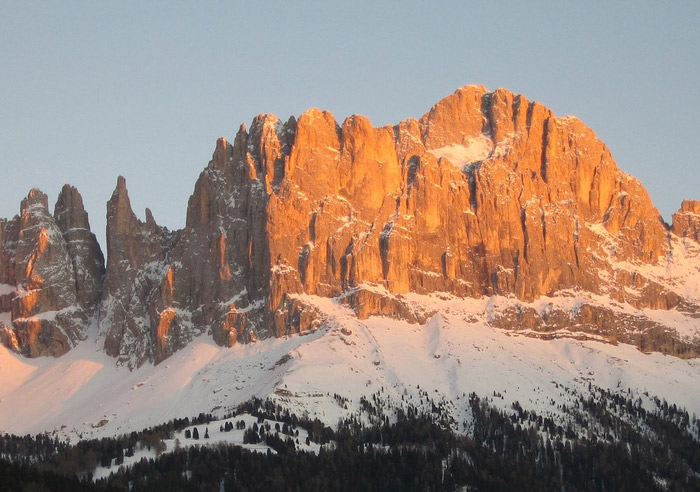 Guided tour into the kingdom of Ré Laurino.

Special features: geology, legends of South Tyrol.
Arrival with the Paulinalift lifts, the excursion then follows the Hirzel trail northwards, as far as the borderline. Note the interesting stratified rocks and the waterfall on the south side of the wall.

The trail follows narrow bends through the Passo di Vajolon, along the mountain rock faces and over an iron stairway.  At Passo Vajolon (2560 m) we will cross the rock in the direction of Mugoni, going down a narrow path to the meadows. We then pass the Fensterlturm mountain and the Masaré, stopping at the Pederiva Refuge.  Descent through the meadows of Ciazonal and on to Passo Carrezza. 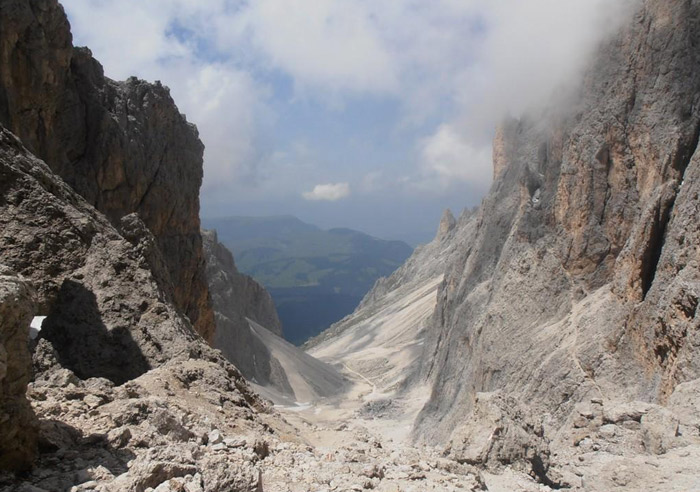 Guided excursion to look at the petrified coral reefs.

Special features: geology, panorama, flora and fauna.
From Passo Sella, we walk along Sassolungo up to the Toni Demetz Refuge (2684 m). We will be in the heart of an ancient coral reef that was once covered in water.
A short descent to Dantersasc. This inhospitable Dolomite landscape can show us some astounding shapes and colours. The history of mountaineering is written on these towers. Like an oasis, Alpe di Siusi opens out before our eyes with its splendid meadows in bloom. A stop at the “Sasso Luongo” Refuge, then on to Saltria.
It is possible to make a full circle of Sassolungo. 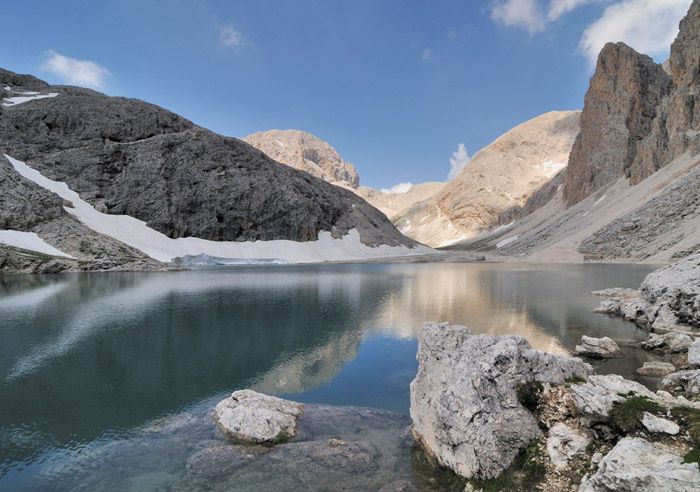 Guided excursion to volcanoes, coral reefs and the six monks.

Special features: panorama, landscape, geology.
The departure point for this excursion is the village of Pera in Val di Fassa. A shuttle service will take you to the Gardeccia Refuge (1900 m). We will continue over the landscape of rocks and stones, on Larsec up to Passo Laussa (2700 m) to arrive up at Lake Antermoja. There will be a stop off at the Antermoja Refuge. The excursion then continues over the volcanic area of Val Duron and then back up to Dialer on the Alpe di Siusi.
The trail goes up to Saltria. 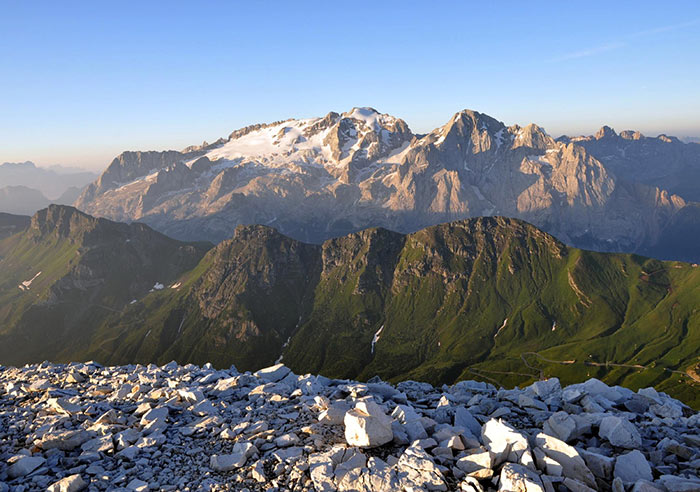 Passo di Forca Rossa, or more simply, Forca Rossa, was considered a strategic point of notable importance during World War I. It was no coincidence that already on the first day of the war, Alpine battalion Val Cordevole occupied it to have full control of the area. The Pass is the main communication route between Malga Ciapela and Passo San Pellegrino and therefore, it is easy to understand its importance during the fighting.
From Malga Ciapelawe will move in the direction of Campin, crossing all of Pian Grant, leaving the vehicle at the bridge over Ru Scalon. From here we continue on the army mule track to the Falier Refuge and after a few bends, we arrive at a fork and take the left, on a slow ascent to the stunning Valle di Franzedas and an alpine hut that we will leave on our left. We will continue to climb the valley along a steep path, with glimpses of Forca Rossa before us, wedged between Col Becher (2444 m) and Piz Le Crane (2760 m), while on the left, the Auta chain closes the left slope of the valley. Once up the grassy valley, we leave marker no. 689, which leads to Passo di Col Becher and continue along the short trail no. 694 to Forca Rossa, along a wide army mule track.

Alpine excursion on the Sella Group up to the highest peak: 3.152 m 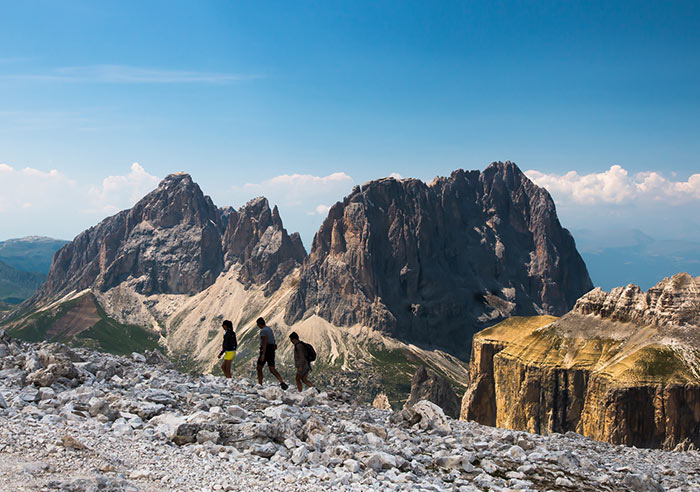 Passo Pordoi (2.240 m) is in Val di Fassa, above Canazei. This is where the cable car departs, taking us up to 2,947 m, on Sass Pordoi, one of the most exposed peaks on the Sella Group. From here, the route continues own to the Pordoi fork, which marks the start of trail no. 627 in the direction of the Boé Refuge (meeting in part, the Dolomite Altavia AV 2).
Crossing the lunar landscape, we approach the Boé Refuge, at the top of the famous Val di Mesdi. Just a short time before the refuge, there is a fork indicating Piz Boé on the right. We will follow the trail no. 638 and from here, the route is all upwards. The trail continues along some sections of exposed rock, made easier by the presence of ropes and metal rungs. Although a steady footing is needed, the tooled section does not present any serious difficulties.
After almost two hours of walking, we will finally reach the peak. On Piz Boé, as well as an aerial transmitter and a cross, we will also find the small Capanna di Fassa, a wooden shelter built on the small number of square metres available. But the true attraction of Boè is the fantastic view over the Sella mountain group and the surrounding Dolomites. Fanes, Marmolata, Sassolungo, Odle… to name just the nearest few. For our excusrion we have chosen the easiest route. There is a shorter, more direct (but also steeper and more exposed) route from Forcella Pordoi along the trail marked Capanna Fassa / Piz Boé.